Way back in the early 1980s, the first Apple II (Integer BASIC) program I ever saw programmed a pencil and graph paper exploration called Spirolaterals. I had a lot of success using Spirolaterals with middle school and secondary students. I used them to introduce the concept of mathematical conjecture.

The coefficient of the last x is called the order.
This graphic shows the path of a 4x  or order 4 spirolateral. 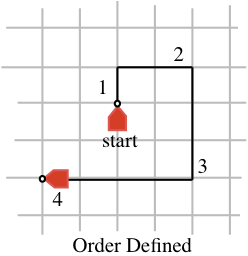 The order can be repeated and the number of repetitions is called the cycle. In the following graphic the order 3 spirolateral has been repeated 4 times, starting with the red, then the green, the blue, and finishing with the black order 3. 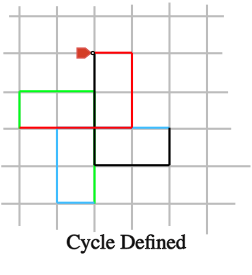 As is evident in the graphic, the order 3 cycle 4 spirolateral closes. It’s the relationship between order and cycle that can be explored and, by reviewing order-cycle data, a conjecture can be formed.
The following graphic is a screen shot of the Scratch program that just computed the path followed by an order 9 cycle 4 spirolateral. 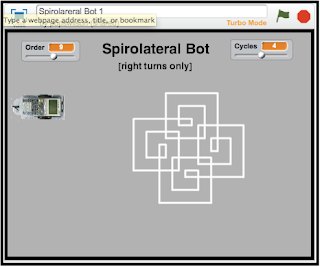 This project can be viewed and downloaded by clicking on the following link.
http://scratch.mit.edu/projects/11260219/
The second Spirolateral Scratch project mixes left and right turns. This greatly increases the number of patterns an order 5 spirolateral can compute. For example, there are 32 ways to order right and left turns for Order 5. In the graphic below, the right-right-left-right-right pattern for order 5 cycle 4 has been computed. 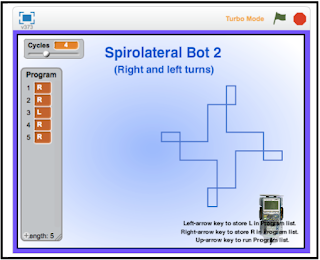 This project is also a simple exercise for learning about how to store and retrieve data from a list.
If enough data is collected by experiment, patterns in behavior do emerge. In other words, there is a relationship between order and cycle in this project that also leads to a conjecture.
This project, Spirolateral Bot 2, can be viewed and downloaded by clicking on this link.
http://scratch.mit.edu/projects/11267799/
Patterns really begin to get complicated (and even more interesting) when other turns, like 60 degree turns, and both left
and right turns are allowed.
The project Spirolateral Bot 3 implements 60º right turns but can easily be modified to allow turns of any degree and both left and right turns. Doing so would make a nice exercise.
In the graphic, an order 5 cycle 3 spirolateral has been computed. 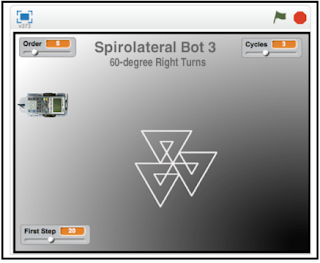 The project can also be viewed and downloaded by clicking on the link below.
http://scratch.mit.edu/projects/11265861/
I do have pdf files for Spirolateral Bots 1 and 2 that go into more detail about programming spirolaterals in Scratch. To request a free copy, send an email to grandadscience@gmail.com

Posted by grandadscience at 2:10 PM