Scratch as a Social Community

The Swiss psychologist Jean Piaget theorized that the cognitive development of children goes through four stages: the sensorimotor, the preoperational, the concrete operational, and the formal operational stage. Piaget’s work led to the theory of knowledge called constructivism. The essence of constructivism is that although information, facts, etc. can be transferred from teacher to student, knowledge has to be constructed by the student.

Seymour Papert, the creator of Logo, the first programming language for kids, took the construction idea, tied it to making things, and called it constructionism.
As Edith Ackermann says, “Piaget’s constructivism offers a window into what children are interested in, and able to achieve, at different stages of their development.” She goes on to say, “Papert’s constructionism, in contrast, focuses more on the art of learning, or ‘learning to learn’, and on the significance of making things in learning.”

Logo, through the work of Mitchel Resnick and his group at MIT, has evolved to Scratch.

That Scratch is a success as a social constructionism community is reflected in its numbers. 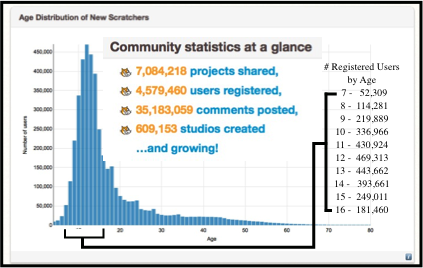 and join the community.

Posted by grandadscience at 9:29 AM