Ancient Sumer was located in southern Mesopotamia in what is now called Iraq. Sumerian history dates to 5000 BC.  In 2340 BC, Sargon I founded the Akkadian dynasty. By 200 BC Sumer had declined to the point of eventually being absorbed by Babylonia
and Assyria. 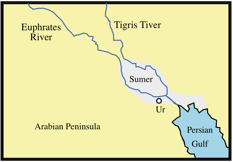 The Sumerians are believed to have invented the cuneiform system of writing on clay tablets with a cut reed.
The Sumerian algorithm for approximating square roots (also known as the Babylonian method and Heron's method) used a numerical method called iteration.
Iteration is a special form of ‘looping’ where given an initial input (called the seed) to a function, the output becomes the next input.


Suppose one wants to compute √(a). One picks a guess, xn-1, plugs it and a into the formula to compute xn. This output, xn becomes the new input, xn-1 and a new output is computed. Do this repeatedly and xn converges to the √(a).

You can view and download this project by clicking on the link below. 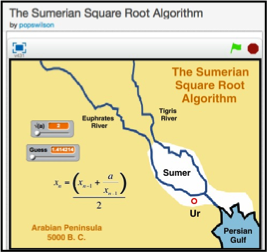 Posted by grandadscience at 7:32 AM