Lewis Carroll is the pen name of Charles Dodgson (1832–1898). Dodgson was a mathematician, logician, and church deacon. He is most remembered as the author of Alice's Adventures in Wonderland and Through the Looking-Glass.
He also wrote a book of problems called Pillow Problems. This project looks at one of those problems, a particularly tricky probability problem. Here it is.

The Fifth Pillow Problem
A bag contains one counter, known to be either white or black. A white counter is put in, the bag shaken, and a counter drawn out, which proves to be white. What is now the chance of drawing a white counter? 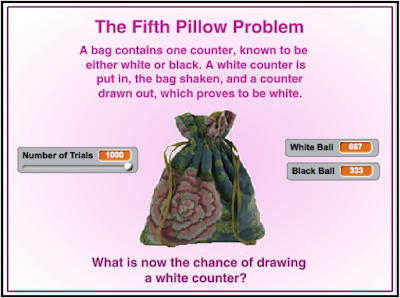 Most problem solvers quickly decide that the probability of drawing the white counter is one-half. This is wrong.
You could of course Google Lewis Carroll’s Fifth Pillow Problem to find a derivation of the theoretical probability. Instead, examine the data from several runs of this project and form your conjecture as to the chances for drawing a white counter and then look at the theoretical solution.

The project can be viewed and downloaded by clicking on this link.
https://scratch.mit.edu/projects/60235654/
Posted by grandadscience at 10:38 AM