The Iconic Image of Deterministic Chaos

The image on the right in the graphic below is the iconic image of what is called deterministic chaos. To understand the mathematical construction of that image (called a map) requires beginning with the graph of the quadratic equation y = x2 + c, as is shown in the image on the left (c = -1.3). 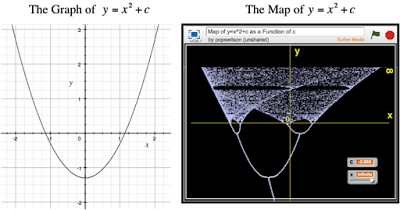 To simplify the process of how you get from the parabola to the map, I’ve written a series of four Scratch projects. The two concepts needed to understand the transition are the concept of iteration and the concept of a mathematical attractor.
The first project looks at a linear equation and computes a single attractor of x = 6.
y = (x + 6)/2 – A Mathematical Sink Hole can be seen at the following link.
https://scratch.mit.edu/projects/12537308/
The next project plots the attractors of the quadratic equation y = x2 + c by plotting on the parabola and on the y = x line (the definition of iteration line).
x2 + c Plots can be seen at this link.
https://scratch.mit.edu/projects/63919408/
This project drops plotting the parabola, stores the iterations in a list, and lets you scan the list for patterns in the attractors.
The Attractors of y = x2 + c is at this link.
https://scratch.mit.edu/projects/62164438/
The last project in the series plots just the x values of each iteration for successive values of c beginning with c = -0.5 until c < -2.
Map of y =x2 + c as a Function of c.
https://scratch.mit.edu/projects/65695456/
A free pdf file containing more information about the mathematics and coding in each project is available on request at grandadscience@gmail.com.
Posted by grandadscience at 9:43 AM