A mathematician is performing a probability experiment.  Starting from 0 (zero) on the integer number line, the mathematician flips a coin and takes one step to the right if it comes up a head or one step to the left if a tail. This process of flipping and moving either right or left is repeated for a given number of flips of the coin.
This project computes the probability of ending the walk at position p after f flips of the coin.
Here is a screenshot reporting the probability of ending a random walk at +3 after 5 flips as 5/32 instead of its decimal equivalent 0.15625. 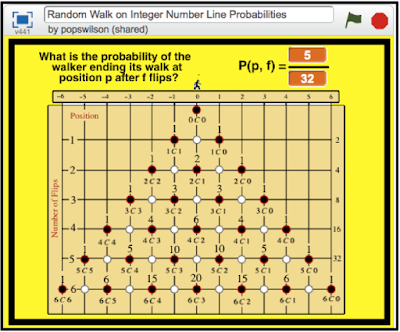