Where Do Random Numbers Come From?

The random numbers generated in a computer or calculator are not truly random. They are not produced by sampling a physical process that contains a random process, such as flipping a coin or monitoring radioactive decay.


The most commonly used algorithm for generating psuedo-random numbers is the linear congruential generator (LCG). The defining equation for a LCG is 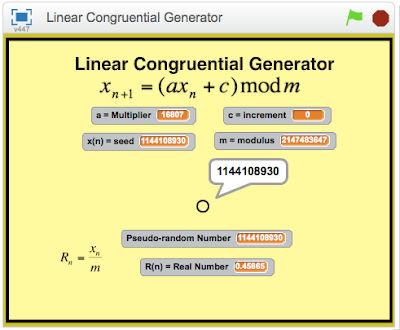 A four-page pdf document takes you through a paper and pencil exercise that explains the mathematics of a linear congruential generator and is available, free, on request. Send a request to grandadscience@gmail.com.
Posted by grandadscience at 11:03 AM