My original copy of Professor Seymour Papert’s book Mindstorms is packed away so I recently ordered a new copy from Amazon. I read the book when it first came out in the late 1970s and became an immediate convert to Papert’s vision for the computer as ‘an object to think with’.

As director of the MIT Artificial Intelligence Lab (now the MIT Media Lab) he and Wallace Feurzeig developed Logo, the first programming language designed with a entry level simple enough that kids could use it but robust enough for serious programming.
Logo was available for the early Apple IIe and Atari 400/800 home computers. I used and taught several versions of Logo but I liked Atari Logo because it had a colorful ‘turtle’ as a cursor.
The Logo turtle is a mathematical object. In fact, it’s a vector object since it can be pushed or pulled in any direction.


Below is the simple code for drawing a square using Logo and the modern successor to Logo, Scratch.

When home computers first became available I was a district math/science/computer coordinator with a limited amount of money to buy hardware and software. Just a handful of teachers were interested in ‘computers in the classroom’ and they were curious to learn what students could and would do if they had even limited access to a computer. Marty was one of those teachers and he pioneered Logo in his second grade classroom.
Marty invited me to visit his class and observe students at the computer. Early one morning I arrived in his classroom as students were taking turns cycling through the single computer center. There they used the computer and Logo to draw squares, triangles, and hexagons and played with the color of the drawing pen.
Marty had taught them that a ‘square corner’ was a turn of 90º and half of a square corner a turn of 45º. The students could then consult a chart that displayed turns as multiples of 45º. They also knew that a triangle needed a 120º turn and not a 60º turn.


What follows is a description of what I observed one particular student do when given a turn at the computer.
To begin, the student typed clear to send the turtle (cursor) to the center of the screen, pointing North (see A in the diagram below).  The student then typed the first command, forward 100 right 90, followed by the return key, and the turtle moved and turned to the position shown in diagram B. The 90º angle indicated that the student was going to draw a square. The second command, forward 100 right 90, moved the turtle to the position shown in C. The third command moved the turtle to D and the fourth command to E, its starting point, with the turtle again facing North. The student had directed the turtle drawn a square.

At this point I expected the student to clear the screen and draw another figure but the student hesitated. Why? What could the student be thinking? We cannot know what is going on inside another human’s head but, when the student commanded the turtle to right 45 (F) it flashed in my head that the student was thinking about crossing the square, from its lower left corner to its upper right corner. In other words, the student was pointing the turtle along the diagonal of the square! 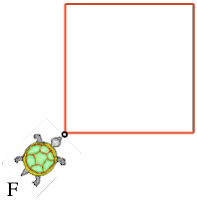 And the student's next command, forward 100, confirmed this as the turtle moved 100 units along the diagonal (G). 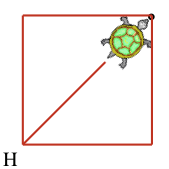 The student then cleared the screen for the next student and returned to the student’s desk.
Clearing the computer’s screen had erased the history of this student’s discovery that the diagonal of a square is longer than the side of the square.
During morning break I described for Marty how that one student had  ‘discovered’ that the diagonal of a square is longer than the side of the same square. We realized that we might be missing other examples of students using the turtle to ‘play’ with mathematics.
That afternoon we set up a video camera focused on the computer screen. Marty would turn on the camera any time students were in the computer center. Later, by reviewing the video, we could identify students that were not just practicing regular polygon construction but were using Logo as ‘an object to think with’.
We found that several students would complete the computer center assignment and then use the remaining minutes to explore on their own. Marty and I were not researchers so we never wrote about the exciting mathematical learning experiences we captured on videotape.
For Marty and myself, the experience amounted to an existence proof that Papert’s belief that students could use Logo as an ‘object to think with’ was true.
Chapter 3 of Mindstorms opens with the following:
“Turtle geometry is a different style of doing geometry, just as Euclid’s axiomatic style and Descarte’s analytic styles are different from one another. Euclid’s is a logical style. Descarte’s is an algebraic style. Turtle geometry is a computational style of geometry.”
Optional Challenge:
Move and turn are primitives in both Logo and Scratch. These two primitives can be combined to program the turtle to draw a circle (actually a regular polygon with a large enough number of sides to make it look like a circle).
To experience computational geometry, visit my Scratch blog by clicking on the following link
http://www.scratch-blog.com/2017/04/polygon-pi.html
and read a post that derives of a set of equations that use move and turn to draw any regular polygon. As the number of sides of the regular polygon increases, its perimeter approaches the circumference of the circumscribed circle.
Posted by grandadscience at 1:12 PM