One of the problems robotics educators face is that there is not an agreed upon sequence of knowledge requirements and a sequence of skill development as there is, for example, for mathematics and science education.

Years ago I watched a video on educational TV that was my introduction to robotics as a topic for educators. The program featured a mechanical engineering professor at MIT describing a project assigned to his freshman engineering students. Each pair of students were given a box of electric motors, gears, wheels and other small parts. The task was to build a robot controlled by a joystick. Students were shown in the machine shop drilling, grinding and wiring their robots. The project culminated in a King of the Mountain competetion. Students robots fought each other to stay at the crest of a hill for a given amount of time.

Along with the mechanical engineering standards he taught he also wanted his students to understand that every engineering task was always constrained by a least three limiting factors.

Great information for men and women looking to become engineers

A teacher in east Russia has rekindled my interest in educational robotics and is the
inspiration for this blog post. As a teacher, Andrei is interested in Scratch and robotics.
Scratch is complete and free but robotics hardware is expensive. Most teachers do not have
the financial support to equip a classroom with several robots. Many teachers have just one
robot, often purchased with their own funds, to demonstrate to students.

In researching the latest robotics hardware and software I found a company, www.vex.comthat was new to me. Vex understands that not all teachers have the funds to invest in the robotics kits they sell. To help with this problem, Vex provides a' virtual' robot modeled after one of their hardware robots. The code used to control the virtual robot is the same code used to control the real robot.

Students that are working with one of the Vex hardware robots at school can now program at
home and test their code on the virtual robot. Students without a real robot can still program the virtual robot. Click on the following link to go to the Vex Virtual Robot.

https://vr.vex.com
Vr.vex runs in your browser so there is nothing to download. Those familiar with Scratch
will immediately recognize the Vr.vex home screen. 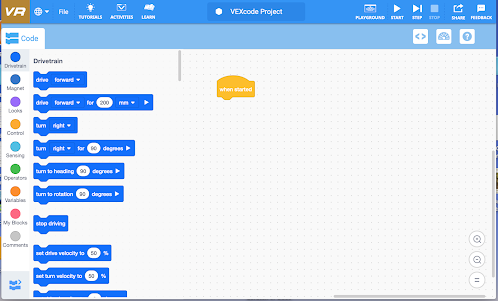 The 'blocks' snap together like Scratch blocks. Below is the code for a Spirolateral (see link
to my Spirolateral post below) that executes right turns only. 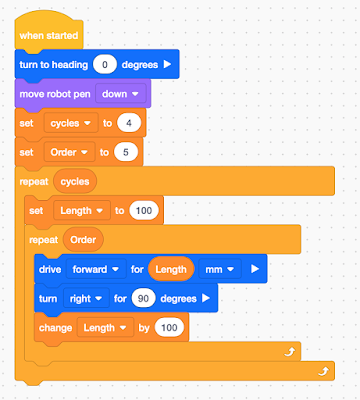 The display screen is called a playground and specific playgrounds are selected from
a drop down menu. Below is the isometric view that displays a run of the above code.

In the following picture the top-down view is displayed. 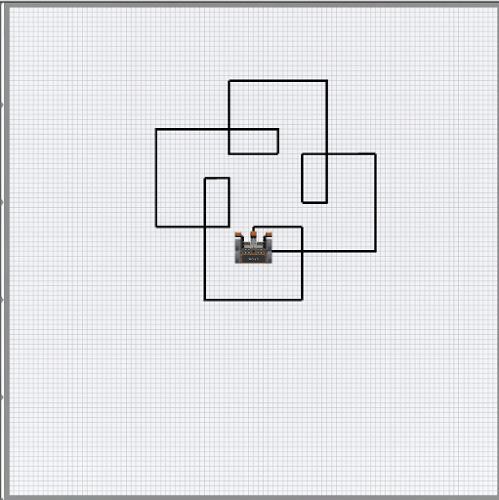 The Vr.vex website has several sample projects that offer robot problems to
solve. If you are interested in robotics, search the Vex website for both hardware and software products.

Here are two Scratch-blog posts that have robotics as a theme.

A Line-following Robot in Scratch

Mark Johnson has the following videos on Youtube that are worth watching.

If interested, I have an academic paper on Spirolaterals that can be obtained free by sending an email request to grandadscience@gmail.com
Posted by grandadscience at 8:55 AM